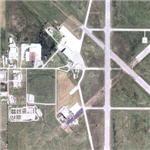 By kjfitz @ 2010-11-30 12:19:12
@ 33.941153, -96.395159
Durant, Oklahoma (OK), US
The airport is named in honor of SOSU alum General Ira Eaker. General Eaker was a 1917 graduate of Southeastern and served in both World War I and World War II. During WWII, General Eaker was commander of the Eighth Air Force in England and led several historic bombing missions against Nazi targets in occupied Europe and Germany.

The City of Durant named an airfield west of the town in honor of then Captain Eaker in the 1930s. The U.S. Navy built the current airfield as an auxiliary field during WWII and it became Durant Municipal Airport after the war. It was later renamed Eaker Field.
Links: en.wikipedia.org
535 views