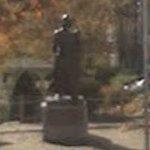 She was born in Haverhill, Massachusetts, moved with her family to Dunbarton, New Hampshire, around 1755, and was the daughter of the first postmaster of New Hampshire, Caleb Page, and his wife Ruth. She married General Stark on August 20, 1758. Together they had 11 children, including their eldest son Caleb Stark. The Molly Stark house still stands in Dunbarton at Page's Corner.
Links: en.wikipedia.org
1,775 views