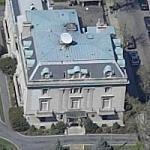 By AlbinoFlea @ 2006-05-21 01:40:45
@ 38.92455975, -77.03695506
Washington, Washington, DC (DC), US
The Embassy of the Republic of Poland is located at 2640 Sixteenth Street, NW in Washington, DC. The building, designed by the architect George Oakley Totten, was completed early in 1910, including the elaborate iron and glass marquee over the front entrance. It was built for Senator John B. Henderson, who two years later added two stories and a basement; Totten again was the architect for this modification. The white limestone structure, with its six balconies and two porches, presents a well-balanced exterior. The style is derived not only from seventeenth and eighteenth century French houses, but incorporates major elements of English style, such as the use of double-hung windows. Perhaps the most interesting aspect of its design, as seen from the street, is that the basic structural elements and ornamentation have been kept relatively simple and consistent. The integration of the balconies (four limestone and two wrought-iron) is particularly effective.

In 1919 the first Polish envoy to the United States, Prince Kazimierz Lubomirski, purchased the property on behalf of the Polish Government. Only a few changes have been made to the building throughout the years. The main rooms look today just as they did in the 1911 photographs, with the exception of some minor changes in lighting and wall coloring. In 1978 a team of specialists was brought from Poland to completely restore the ornamental plaster and woodwork, returning the interior to its original grandeur and artistic integrity.
Links: en.wikipedia.org
818 views