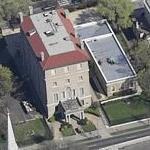 By AlbinoFlea @ 2006-05-15 23:31:33
@ 38.92547975, -77.03583111
Washington, Washington, DC (DC), US
The Cultural Institute of Mexico in Washington, D.C. is one of the most important artistic and cultural centers established outside Mexico. Its primary mission is to promote and disseminate among the local community, the vast and rich traditions of Mexico's cultural past and present.

Washington, D.C. is culturally and politically, one of the most privileged and important cities in the world. The Cultural Institute of Mexico maintains close contact with its local community, offering an array of artistic and cultural activities as part of its ever-increasing cultural program. From academic events to cinema, whether in literature, music, the visual and performing arts, to Institute’s goal is to support and promote the best of Mexico's artistic and cultural expressions.

The Cultural Institute of Mexico, situated on a magnificent mansion on 16th Street, N.W. has become an important meeting place for the intellectual and artistic minds on both sides of the border. The lnstituto has developed a close relationship with key cultural and academic institutions of the nation's capital aiming at increasing the mutual understanding between our countries. In the future, the Instituto will continue to support and promote the rich manifestations of the human spirit.
Links: en.wikipedia.org
932 views