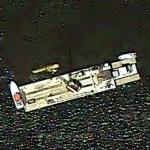 A small barge already in the area was used to lift the aircraft from the water soon after the crash.
Links: www.leadertelegram.com
1,151 views