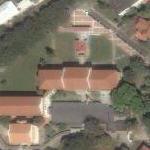 In January 1964, Balboa High School was the scene of a controversial confrontation between high school students from Panama's Instituto Nacional and groups of students and parents from Balboa High School. The events, known in Panama as Martyrs' Day and in the U.S. as 1964 Panama Canal riots, started after a Panamanian flag was torn during conflict between Panamanian students and Canal Zone Police officers, over the right of the Panamanian flag to be flown alongside the U.S. flag. There are conflicting claims about how the flag was torn.

The ensuing violent reaction by Panamanians at the border with the Canal Zone when news of the torn flag reached Panama City, resulted in an overwhelmed Canal Zone Police calling for support from U.S. Army units that became involved in suppressing the violence, and after three days of fighting, about 21 Panamanians and four U.S. soldiers were killed. The incident is considered to be a significant factor in the U.S. decision to transfer control of the Canal Zone to Panama through the 1977 Torrijos-Carter Treaties.
Links: en.wikipedia.org
2,310 views