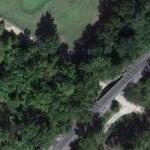 By forthefallendrms @ 2011-08-08 13:00:06
@ 33.479912, -81.955959
Aiken, South Carolina (SC), US
The dead town of Hamburg, South Carolina, was once a thriving upriver market located in Edgefield District (now Aiken County). It was founded by Henry Shultz in 1821, across the Savannah River from Augusta, Georgia, in direct competition with that city. In its heyday, 60,000 bales of cotton worth $2,000,000 were brought by wagon to Hamburg each year. This cotton continued by pole boat or steam boat to the ports of Charleston or Savannah for subsequent shipment to manufacturers in New England or Europe. During his American tour as 'Guest of the Nation', the Marquis de Lafayette visited Hamburg on March 24, 1825. Hamburg received another boost when it became the western terminus of the South Carolina Railroad. This was the world's first railroad in the modern pattern. Providing scheduled steam service over 136 miles of line from Charleston to Hamburg, it was the world's longest at its completion in 1833.
Links: en.wikipedia.org
625 views