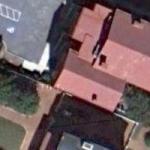 By forthefallendrms @ 2011-08-08 05:16:29
@ 33.471724, -81.964978
Augusta, Georgia (GA), US
Thomas "Tommy" Woodrow Wilson (1856-1924) lived in this Presbyterian Manse from 1860-1870. Tommy spent the formative years of his childhood in Augusta, years that would affect him for the rest of his life. While living in Augusta Wilson experienced the hardships of the Civil War and Reconstruction. He also began his education, tasted leadership as president of the Lightfoot Baseball Club, and grounded his deep Presbyterian faith. The Boyhood Home of President Woodrow Wilson is owned and operated by Historic Augusta, Inc. Historic Augusta preserves and maintains the Boyhood Home of President Woodrow Wilson in order to inform and educate the public as to how Woodrow Wilson's childhood in Augusta, Georgia affected him as he later served as President of the United States.
Links: www.wilsonboyhoodhome.org
683 views