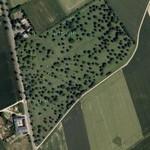 By Dania @ 2010-07-19 15:22:20
@ 50.342215, 2.753856
Arras, France (FR)
The Neuville-St Vaast German War Cemetery is located in Neuville-Saint-Vaast, a small village, near Arras, Pas-de-Calais, in northern France. The cemetery was established by the French in 1919 as a concentration cemetery for German war casualties from the regions north and east of Arras. It is now administered by the German War Graves Commission, (Volksbund Deutsche Kriegsgräberfürsorge).

It is the largest German cemetery in France, containing 44,833 burials. There is no central building, just a field of crosses, with soldiers buried four to a grave. There are, too, a few headstones for Jewish soldiers who fell fighting for Imperial Germany. The bulk of the fatalities occurred during the Battles of Artois in Autumn 1914, Spring 1915 and Autumn 1915; and the Battles of Arras in Autumn 1914, Spring 1917 and Spring 1918.
Links: en.wikipedia.org
559 views