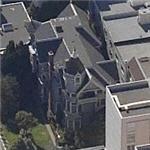 The house withstood the 1906 Earthquake with only slight damage. However, the home was threatened by the devastating fire, which followed the earthquake and destroyed a 40% of San Francisco. The Haas family watched the fire from the roof of their house, but was soon forced to evacuate by city authorities. So the family, along with most other San Francisco residents, went to the nearest public park, Lafayette Park, to camp out during the emergency. Later, they temporarily moved to a large house in Oakland while the City was reconstructed.

The 1928 addition — living quarters over a garage — were built to provide needed space for the additions to the family when Billy and Madeline were brought to the Haas home. The architect of the addition, Gardner Dailey, later in life received recognition for his work on Ranch-style houses in the Bay Area.
Links: en.wikipedia.org
1,409 views