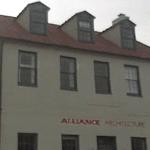 By kkeps @ 2008-11-06 14:56:42
@ 38.978309, -76.495684
Annapolis, Maryland (MD), US
The House by the "Town Gates" was originally constructed in the second quarter of the 19th century as a single-family dwelling. The property was originally the site of the Annapolis "Town Gates." The dwelling was converted into commercial spaces by the latter part of the 19th century. The first known owner of the "House by the Town Gates" was Vachel Seviere who acquired the lot in 1832. Seviere¿s house appears to have been built directly on the site where an early street, Sobieski Street, once joined the intersection of Calvert, Cathedral, and West Streets. With the erection of the house, Sobieski Street disappeared with the exception of a short cobblestone alley along the west side of the building. This alley is the only undisturbed example of original cobblestone paving known in Annapolis.
Links: www.waymarking.com
537 views