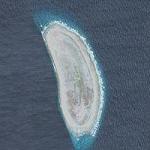 Sparse remnants of trails and other artifacts indicate a sporadic early Polynesian presence but Howland Island was uninhabited when the United States took possession of it in 1857 through claims under the Guano Islands Act of 1856. Its guano deposits were mined by American and British companies during the second half of the 19th century. In 1935, a short-lived attempt at colonization was begun with a rotating population of four young civilians from Hawaii in the settlement Itascatown (a cluster of no more than two or three small structures named after the U.S. Coast Guard vessel that brought them and made regular visits during that era). Similar projects were started on nearby Baker Island and on Jarvis Island, but these were disrupted by World War II and abandoned.

Howland Island was a refueling stop for American pilot Amelia Earhart and her navigator Fred Noonan on their round-the-world flight in 1937. They took off for the island from Lae, New Guinea, but were never seen again.

A Japanese air attack killed two of the colonists at the beginning of U.S. involvement in World War II and the two survivors were evacuated in early 1942. The island was then occupied by the U.S. military but abandoned after the war. Public entry to the island is by special-use permit from the U.S. Fish and Wildlife Service only and is generally restricted to scientists and educators.
Links: en.wikipedia.org
3,834 views