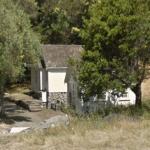 He resided on these acres, which he called 'The Hights,' from 1886 to 1913. In this building, The Abby, he wrote Columbus and other poems. He planted the surrounding trees and he personally built, on the eminence to the north, the funeral pyre and the monuments dedicated to Moses, General John C. Frémont, and Robert Browning.
Links: en.wikipedia.org
614 views