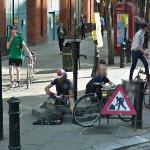 At the time, it was widely believed that cholera was an airborne disease but Snow believed that cholera entered the body through the mouth. In 1854 a cholera outbreak occurred and Snow plotted the location of the houses where there were cases of cholera. The houses were arranged around a water pump. Snow had the handle removed from the pump that caused the number of cases of cholera to diminish. Despite this it still took several years before Snow's theory was accepted.

The water pump was sited here in 1992 as it is close to where John Snow carried out his work and is testament to his pioneering work.
Links: en.wikipedia.org
479 views

kjfitz
@ 2015-04-09 07:40:21
I recommend the book Ghost Map for more information about John Snow's investigation into the causes of the London Cholera outbreaks: