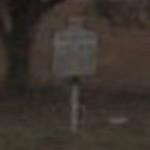 By Dania @ 2010-08-08 14:36:15
@ 38.16257, -77.200618
Port Royal, Virginia (VA), US
﻿John Wilkes Booth assassinated President Abraham Lincoln on April 14, 1865. He escaped out of Washington, D.C. passing through the rural Maryland Countryside. Several days after the assassination, Booth crossed the Potomac River into Virginia and made his way to a farm owned by Richard Henry Garrett, which was located near Port Royal, Virginia. On April 26, 1865, Federal Cavalry advanced to the Garrett Property and Booth was located hiding in a barn. When Booth resisted Federal Troops under the command of Lieutenant Edward Doherty killed him.
This historical marker is located in the southbound lanes of Route 301 near the intersection of Route 17 in Port Royal, Virginia. The actual location of the Garrett Farm House is located in the median of U. S. Route 301, about 2.5 miles south of this marker. A historical marker (EP-20 and Waymark WMJNR) located at N 38° 08.441 - W 077° 13.701 in the Northbound Lane of Route 301 is actually very close to the site of the Garrett Farm. You can actually take a small path into the median to the site where the farmhouse stood.
Links: www.waymarking.com
5,605 views