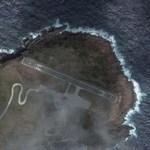 Yrausquin Airport covers a relatively large portion of the small island of Saba. Some aviation experts are of the general opinion that the airport is one of the most dangerous in the world, despite the fact that no major tragedies have happened at the facility. The airport's sole runway is marked with an X at each end, to indicate to commercial pilots that the airport is closed for commercial aviation.

The danger arises from the airport's physical position. It is flanked on one side by high hills, and on the other side and at both ends of the runway by cliffs dropping into the sea. This creates the possibility that an airplane might overshoot the runway during landing or takeoff and end up in the sea or on the cliffs.

Despite the fact that the airport is marked as a non-commercial facility, airlines are able to land there by obtaining waivers from the Netherlands Antilles' Civil Aviation Authority.

Yrausquin Airport can be seen from some places in Saint Martin.
Links: en.wikipedia.org
1,383 views