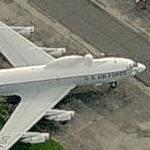 The NKC-135A on display is one of 14 KC-135As permanently converted for special testing. It was extensively modified by the Air Force weapons Laboratory at Kirtland Air Force Base, N.M., and used in an 11-year experiment to prove a high-energy laser could be operated in an aircraft and employed against airborne targets. During the experiment, the Airborne Laser Lab destroyed five AIM-9 Sidewinder air-to-air missiles and a Navy BQM-34A target drone.

The aircraft was flown to the museum in May 1988.
Links: www.nationalmuseum.af.mil
2,806 views