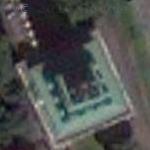 By kkeps @ 2011-12-31 13:02:25
@ 55.751206, 37.622388
Moscow, Russian Federation (RU)
The Konstantino-Eleninskaya Tower (Russian: Константино-Еленинская башня) is a tower on the eastern wall of the Kremlin, overlooking the so-called Vasili's Slope (Васильевский спуск), which begins at the Red Square and ends at the Moscow River. The tower was built in 1490 by an Italian architect Pietro Antonio Solari on the spot of gates to the whitestone Kremlin. It was named after the Church of Konstantine and Elena in the Kremlin (second half of the 17th century), which would be demolished by the Soviets in 1928. The Konstantino-Eleninskaya Tower had its own gates and a lift bridge, protected by guards at all times. In the late 18th century - early 19th century the gates were bricked up and the bridge was dismantled. The tower's height is 36.8 m.
Links: en.wikipedia.org
501 views