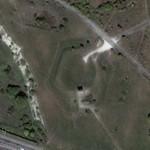 By Dania @ 2009-07-26 04:26:46
@ 50.029137, 19.961654
Krakow, Poland (PL)
Płaszów (Polish pronunciation: [ˈpwaʂuf]) was a Nazi German concentration camp in the southern suburb of Kraków, founded by the Nazis in Płaszów soon after the German invasion of Poland and the creation of the General Government, during German Nazi occupation of Poland. The construction of the camp, originally intended as a forced labour camp, began in summer 1940. In 1941 the camp was extended and subsequently became a concentration camp with deportations of the Jews from the Kraków Ghetto beginning October 28, 1942. Commanding the camp was Amon Göth, an SS commandant from Vienna who was known for being uncommonly sadistic in his treatment of prisoners. On March 13, 1943, Göth personally oversaw the liquidation of the Kraków Ghetto, forcing its Jewish inhabitants deemed capable of work into the camp. Those deemed unfit for work were killed. Under him were his staff of SS men and a few SS women, including Gertrud Heise, Luise Danz, Alice Orlowski and Anna Gerwing.

The camp is featured in the movie Schindler's List about the life of Oskar Schindler.
Links: en.wikipedia.org
5,351 views