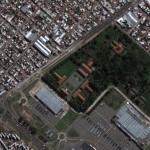 By giove @ 2010-12-15 13:11:49
@ -34.698437, -58.5358
Buenos Aires, Argentina (AR)
The 1989 attack on La Tablada was an assault on the military barracks located in La Tablada, in the province of Buenos Aires, Argentina, by 40 members of Movimiento Todos por la Patria (MTP), headed by former ERP leader Enrique Gorriarán Merlo. 39 people were killed and 60 injured during the take-over of the barracks by the Army. The MTP carried out the assault under the false pretense of preventing a military coup, allegedly planned for the end of January 1989 by the Carapintadas, a group of far-right militaries opposed to the investigations concerning the "Dirty War". The Argentinean president of the time, Raúl Alfonsín declared that the attack, with the ultimate goal of sparking a massive popular uprising, could have led to civil war. Given a life sentence and imprisoned, as fellow comrades, in high security quarters, Gorriarán Merlo was eventually freed in 2003. He died in September 2006.
Links: en.wikipedia.org
761 views