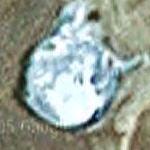 By kjfitz @ 2005-12-08 11:58:00
@ 49.952324, 77.818909
Semey, Kazakhstan (KZ)
Russian nuclear tests have been conducted in two major areas. The former Soviet Union’s largest nuclear test site was located near Semipalatinsk, Kazakhstan. The Semipalatinsk Test Site was founded in 1948 with the first nuclear explosion tested in 1949 and the last in 1989. Of the 467 nuclear detonations conducted there, 346 were underground, with the first of these underground experiments conducted in 1961. A total of 87 atmospheric and 26 surface nuclear detonations were also performed at the site between 1949 and 1989. Some tests involved multiple weapon detonations.

During the early days of the atomic energy program in the former Soviet Union, some unfortunate events occurred. The country's first atomic test in Semipalatinsk in 1949 exposed over 25,000 people downwind from the blast to significant doses of fission products.
Links: www.globalsecurity.org
6,570 views