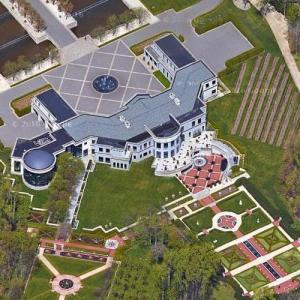 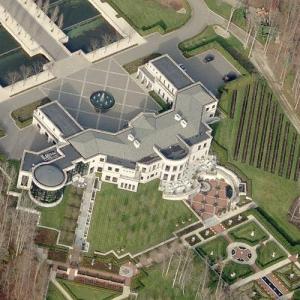 By kenny1 @ 2008-11-14 19:55:21
@ 39.965644, -74.931697
Moorestown, New Jersey (NJ), US
This mansion, known as Villa Collina, is owned by Vernon Hill, the ceo and founder of Commerce Bank. The home measures in at a whopping 46,000 square feet and is the largest residence in New Jersey. The home has a two story atrium style formal living room, billiards room, and a library. A family kitchen, prep kitchen, green house, guest room, and maids rooms are all located on the first floor. The second floor contains 5 massive bedroom suites. The home's exercise room clocks in at a whopping 4,000 square feet. The home also has twin two story garages on either end of the home that can hold up to 30 cars each. The home has an orangery.

Hill is a businessman, the founder and former chairman of Metro Bank, a UK retail bank with 66 stores, and assets of £7.4b ($10.6b). He was also the founder, former chairman, president and CEO of Commerce Bancorp of Cherry Hill, New Jersey, and chairman of Fetch Inc. In 2016, Hill was named chairman of Philadelphia-based Republic Bank. Metro Bank UK was launched in London in July 2010, with Hill as co-founder and vice-chairman. Hill is also the author of Fans Not Customers: How to Create Growth Companies in a No Growth World, which was published by Profile Books in October 2012. It argues that it is better to have fans rather than customers and urges businesses to compete on service rather than price. His business approach emphasizes building a solid customer base and working from there. As a result of his efforts Vernon Hill has a net worth of $414 million from banking and currently resides in the largest mansion in Moorestown, New Jersey.

If you want to live the lavish lifestyle of Vernon W. Hill II, the flamboyant founder and former chairman of Commerce Bancorp you can buy his Loveladies vacation home which was recently put on the market for $6.5 million, according to the Zillow listing.
Links: en.wikipedia.org, homesoftherich.net
62,460 views