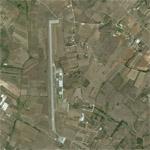 By giove @ 2009-12-07 12:06:17
@ 42.378931, 13.314185
L'Aquila, Italy (IT)
Following the earthquake that hit L'Aquila in 2009, the airport has played a key role in rescue operations. From here, for example, have left the helicopters have evacuated more than 150 inmates of the San Salvatore . Moreover, with the decision to move to Aquila the G8 summit, the structure has been restored and adequate and the work has been extended to the road outside. In particular, the airport has been equipped with a parking lot, a fitting parallel to the runway and new establishments, including the headquarters ENAV / ENAC, were also installed as PAPI, NDB, and has done runway lighting . During the G8 have gone to the airport of the Eagle 146 aircraft, 2544 people and 37 delegations .

After the G8 airport, thanks to the work of enlargement, was declared eligible to receive civil traffic. On October 15, 2009 the Municipality of L'Aquila has published the announcement for the temporary management of the airport for a period of 6 months in order to immediately open the airport to commercial traffic. During this period the European race will be prepared to identify the final operator
Links: it.wikipedia.org
446 views