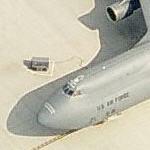 By kjfitz @ 2007-08-16 15:26:29
@ 39.837045, -84.041339
Dayton, Ohio (OH), US
The Lockheed C-5 Galaxy is a military transport aircraft designed to provide strategic heavy airlift over intercontinental distances. It is the largest American military transport and one of the largest military aircraft in the world, designed to carry outsize and oversize cargo. The C-5 was developed and produced by Lockheed and is operated by the United States Air Force. The C-5 Galaxy is one of the physically largest aircraft in the world with the ability to fly on a regular basis. The Boeing 747-400ER has the highest gross weight of aircraft in regular service.
Links: en.wikipedia.org
888 views