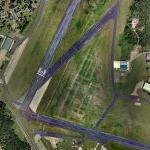 By kjfitz @ 2009-09-11 16:29:33
@ 51.327501, .033474
Biggin Hill, United Kingdom (GB)
The airfield was originally opened by the Royal Flying Corps (RFC) during the First World War. At first it was used for wireless experiments, but was then established in 1917 as part of the London Air Defence Area, responsible for defending the capital against attacks by Zeppelins and Gotha bombers. To this end, 141 Squadron of the RFC was based at Biggin Hill and equipped with Bristol Fighters.

During the Second World War the airfield was one of the commanding bases for the Battle of Britain, with both Spitfires and Hurricanes from a variety of squadrons being based there. The squadrons based at Biggin Hill claimed to have destroyed 1,400 enemy aircraft, at the cost of the lives of 453 Biggin Hill based aircrew. Because of its importance to the capital's defence, the airport itself became a target. Between August 1940 and January 1941, the airfield was attacked twelve times, the worst of which wrecked workshops, stores, barracks, WAAF quarters and a hangar, killing 39 people on the ground.
Links: en.wikipedia.org
761 views