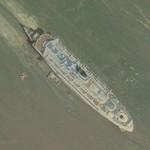 Following an extended lay-up period and reconstruction into a diesel-engined Caribbean cruise ship, the ship re-emerged in 1983 as MS Caribe I for Commodore Cruise Line. In 1993 she was sold to Regal Cruise Line and received her final name. She operated for Imperial Majesty Cruise Line from 2003 until 2009.

The Regal Empress was also the last vintage passenger ship to regularly sail from the United States.

The Regal Empress departed Freeport in early April to sail to her final destination in Alang. Her voyage took over 3 months to complete. During her voyage, she was renamed the Regal Tmpress. She was beached on 24 July 2009. In October, scrapping began starting from the bow of the ship. The demolition of the ship was completed in early 2010.

Anonymous
@ 2012-01-18 13:54:15
My wife and I celebrated our 5th Wedding Anniversary with a cruise on The Empress when it was located at Port Manatee in Tampa Bay Florida; great memories and truly a Classic Ship. God Speed old Girl...

Anonymous
@ 2014-05-11 11:19:11
I was in The US Navy for 23 years, and when I steeped aboard this vessel, I was annoyed that it was not the same as the one in the cruise package.
This was an old vessel from the mid 50's, the rooms were shabby, and the service fair to midland. It breaks my heart to see ships scrapped.. especially The USS Enterprise, USS Coral Sea, and others..
But with time, we all get scrapped in one way or another.
another memory, another razor blade..