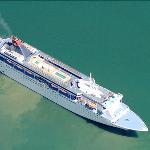 If so, the one in the other entry was named the Norwegian Sea. The N-Sea definitely was renamed and repainted into the Star Libra in 2005. The question is whether that's the N-Sea in the other link. If it's not the N-Sea, it's definitely a sister ship, as that one and this Star Libra have exactly the same lines. I think they are the same ship, but it's possible that there was another NCL ship of the same class.

TexasAndroid
@ 2007-06-01 10:24:58
Process of identifying it as the Star Cruises Star Libra:
1) Noted the star shaped logo on the stack
2) Was able to see the ship name on bow enough to see it was "Star ???", but not identify the latter part of the name.
3) On Wikipedia, looked up the list of cruise lines. Looked for a cruise line with "Star" in it's name, as a first guess, and hit right away with Star Cruises. A jump to the Star Cruises page on Wikipedia showed the correct logo, so I had the line.
4) Wikipedia listed the ships of Star Lines, all of which have zodiac based names. Comparing the list to the not-quite readable name on the bow, it was obviously the Star Libra.
5) Visual pic of the Star Libra matched the visual lines of the ship in question.

So that's how I identified the Star Libra. I've been working today to identify as many cruise ships already in VGT as I can, and have identified several.