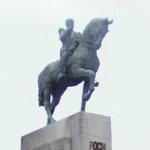 A native of Tarbes in the south of France, Foch enlisted in the infantry during the Franco-Prussian War and later graduated from the École d'application de l'artillerie et du génie as artillery officer. For his scholarship of military history and strategic skills, he was appointed
instructor at Staff College.
Links: en.wikipedia.org
405 views