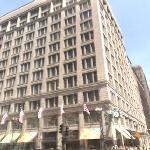 By kkeps @ 2009-12-23 20:30:17
@ 41.883206, -87.628171
Chicago, Illinois (IL), US
Marshall Field and Company Building or Macy's at State Street is the former flagship location of the former Marshall Field's department store and the current location of the Chicago flagship of Macy's. The building is located in the Chicago Loop community area in Cook County, Illinois, United States, and it takes up the entire city block bounded clockwise from the west by North State Street, East Randolph Street, North Wabash Avenue, and East Washington Street.[3] The former department store established numerous important business firsts in this building,[4] and it is regarded as one of the three most influential establishments in the nationwide development of the department store.[5] Both the building name and the name of the stores formerly headquartered at this building changed names on September 9, 2006 as a result of the merger of the May Department Stores (Marshall Field's former parent) with the Federated Department Stores which led to the integration of the Marshall Field's stores into the Macy's retailing network.

The building, which is the second largest store in the world, was both declared a National Historic Landmark and listed on the National Register of Historic Places on June 2, 1978,[2][1][8] and it was designated a Chicago Landmark on November 1, 2005.[9] The building architecture is known for its multiple atria and for having been built in stages over the course of more than two decades.[10] Its ornamentation includes a Tiffany & Co. mosaic ceiling and a pair of well-known outdoor clocks, which serve as symbols of the store.
Links: en.wikipedia.org
509 views