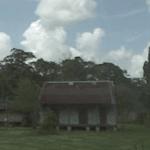 By kkeps @ 2008-11-03 17:47:01
@ 29.995553, -90.813148
Convent, Louisiana (LA), US
Architectural evidence shows the Mather House to have been constructed in two stages. The earliest portion (located on the downriver side of the dwelling) consists of two front rooms (salle and chambre), one rear cabinet and a second rear space which may or may not have been enclosed. The attic above this portion of the home features a Norman-like truss with Roman numerals incised in its framing members. (The truss is being referred to as "Norman-like" because its construction, although similar, is more simple than that of the typical Norman truss.) Historic documents indicate a house was on the site in 1811. Although it cannot be specifically confirmed, it is quite possible that the older portion of the Mather House is that building. The residence's later portion (built on the home's upriver side) contains three spaces: a third front room, which was added beside the salle; a gallery extension located in front of the new room; and an additional cabinet built behind the new space. The rear central space may have been opened at this time. The roof truss above the addition is more simple than that of the older portion, and its numbering system consists of crude axe marks representing numbers. As part of the work for the addition, the home's original chimney was removed. Two new chimneys were built, one in the downriver room of the original structure and one in the new upriver room. (Both chimneys were placed on inside walls.) Because the Norman-like truss was in the way of the new downriver chimney, it was cut and new members were added on both sides of the chimney to support it.
Links: www.waymarking.com
960 views