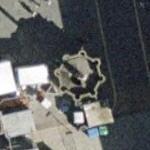 By kjfitz @ 2006-12-21 13:04:28
@ 55.949679, -3.19019
Edinburgh, United Kingdom (GB)
A mercat cross is a market cross found in Scottish cities and towns where trade and commerce was a part of economic life. It was originally a place where merchants would gather, and later became the focal point of many town events such as executions, announcements and proclamations. To this day several important announcements and proclamations are still ceremonially made at the Mercat Cross in Edinburgh, including the calling of general elections and the succession of new monarchs.

Despite the name, the typical mercat cross is not actually cruciform - variations range from a short pole stuck in the ground to the grand pillar rising out of the "cross house" in Edinburgh.

Scottish emigrants to countries such as Canada and especially Australia brought the mercat cross with them, and several cities in the new world have or used to have them in the town centre.
Links: en.wikipedia.org
620 views