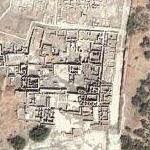 By kjfitz @ 2008-08-23 22:02:13
@ 27.326578, 68.137025
Moenjodaro, Pakistan (PK)
Mohenjo-daro (Urdu: موئن جودڑو, Sindhi: موئن جو دڙو, Hindi: मोहन जोदड़ो, English: Mound of the Dead) was one of the largest city-settlements of the Indus Valley Civilization of south Asia situated in the province of Sind, Pakistan. Built around 2600 BC, the city was one of the early urban settlements in the world, existing at the same time as the civilisations of ancient Egypt, Mesopotamia, and Greece. The archaeological ruins of the city are designated a UNESCO World Heritage Site. It is sometimes referred to as "An Ancient Indus Valley Metropolis".
Links: en.wikipedia.org
11,393 views

"A hellish heat wave hit Pakistan last week, sending the mercury to an astonishing 53.5°C (128.3°F) at the town of MohenjuDaro on Wednesday May 26, reported the Pakistani Meteorological Department. While this temperature reading must be reviewed by the World Meteorological Organization (WMO) for authenticity, not only is the 128.3°C reading the hottest temperature ever recorded in Pakistan, it is the hottest reliably measured temperature ever recorded on the continent of Asia."