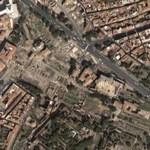 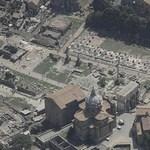 The Forum Romanum is located in a valley between the Capitoline Hill on the west, the Palatine Hill on the south, the Velia on the east and Quirinal Hill and the Esquiline Hill to the north. The Velia was levelled in Antiquity.

The importance of the Forum area is indicated by the presence of many of the central political, religious and judicial buildings in Rome. The Regia was the residence of the kings, and later of the rex sacrorum and pontifex maximus; the Curia, was the meeting place of the Senate; and the Comitium and the Rostra, where public meetings were held. Major temples and sanctuaries in the Forum include the Temple of Castor and Pollux, the Temple of Saturn and the Temple of Vesta. Commercial and judicial activities took place in the basilicas, the two remaining are the Basilica Aemilia and the Basilica Julia. Due to the political importance of the area there were also numerous honorary monuments.
9,819 views

Walter_Muzzy
@ 2013-09-24 15:30:58
I wrote a long archaeological and historical Roman Forum Walking Tour and posted it on the Fodor's Messageboard if anyone is interested.