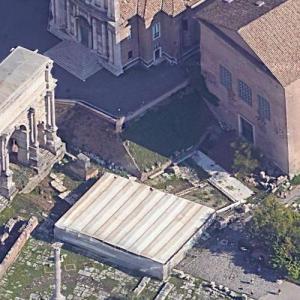 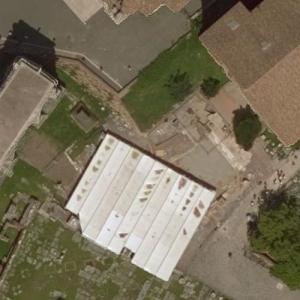 By DonMartini @ 2006-11-18 03:28:59
@ 41.89295, 12.485366
Rome, Italy (IT)
On the Ides of March (March 15) of 44 BC, a group of senators called Caesar to the forum for the purpose of reading a petition, written by the senators, asking him to hand power back to the Senate. However, the petition was a fake. Mark Antony, having vaguely learned of the plot the night before from a terrified Liberatore named Servilius Casca, and fearing the worst, went to head Caesar off at the steps of the forum. However, the group of senators intercepted Caesar just as he was passing the Theatre of Pompey, and directed him to a room adjoining the east portico.

As Caesar began to read the false petition, the aforementioned Casca pulled down Caesar's tunic and made a glancing thrust at the dictator's neck. Caesar turned around quickly and caught Casca by the arm, crying in Latin "Villain Casca, what do you do?" Casca, frightened, called to his fellow senators in Greek: "Help, brothers!" ("αδελφοι βοήθει!" in Greek, "adelphoi boethei!"). Within moments, the entire group, including Brutus, was striking out at the dictator. Caesar attempted to get away, but, blinded by blood, he tripped and fell; the men eventually murdering him as he lay, defenseless, on the lower steps of the portico. According to Eutropius, around sixty or more men participated in the assassination.

The dictator's last words are, unfortunately, not known with certainty, and are a contested subject among scholars and historians alike. In Shakespeare's Julius Caesar, Caesar's last words are given as "Et tu, Brute Then fall, Caesar." ("And you, Brutus? Then fall, Caesar."). However, this is Shakespeare's invention. Suetonius reports his last words, spoken in Greek, as "καί σύ τέκνον" (transliterated as "Kai su, teknon?"; "You too, child?" in English). Plutarch says he said nothing, pulling his toga over his head when he saw Brutus among the conspirators.
Links: en.wikipedia.org
14,309 views

Anonymous
@ 2009-02-13 07:18:16
Actually, Caesar was not assassinated in the Senate house at the Forum. He was killed at Pompey's theater which the Senate was using as a temporary meeting place. The actual site of his death is at the Largo Argentina immediately behind the remains of the round temple.

Anonymous
@ 2009-06-18 13:02:40
wherever it was he certainly was killed,but some say he didnt die instantly, but bled to death. either way a terrible end for a person who could have guided rome to peace.

Anonymous
@ 2012-08-12 02:43:25
As 'anonymous' said, Caear wasn't killed here, but at Pompey's Theatre indeed. Shown here is the Curia Julia, a very intersting building in itself and for long periods it used to be the commonest place for the Senate to gather. Not so on the 15th of March, 44BC.