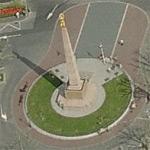 By neotrix @ 2011-02-25 06:58:11
@ 49.60968102, 6.12924993
Luxembourg, Luxembourg (LU)
The Monument of Remembrance, usually known by the nickname of the Gëlle Fra (Luxembourgish for 'Golden Lady'), is a war memorial in Luxembourg City, in southern Luxembourg. It is dedicated to the thousands of Luxembourgers who volunteered for service in the armed forces of the Allied Powers during World War I.

The Gëlle Fra is situated in Constitution Square, in the Ville Haute quarter of central Luxembourg City.
Links: en.wikipedia.org
804 views