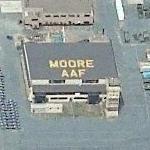 Moore Army Airfield was declared excess when Fort Devens was downgraded to a training area, and was closed in the late 1990s. By the time of its closure, two of the original runways had been abandoned, and the longest runway was still maintained (14/32, approximately 4,700 ft long). Two helicopter runways (2/20 & 15/33, each approximately 500 ft long) were located at the northeast corner of the airfield. The closure of Fort Devens meant some relief for local residents from the noise from Army helicopters. However the runway at Devens, Moore AAF, still exists, and there are unverified reports that Moore may be turned into a local airport. Since its closure, it has been used to store police vehicles, and to run auto races.
Links: www.globalsecurity.org
1,867 views