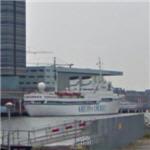 By kjfitz @ 2010-01-18 14:34:37
@ 52.379832, 4.920273
Amsterdam, Netherlands (NL)
MS Kristina Regina is a cruiseship owned by the Finnish shipping company Kristina Cruises. She was originally built in 1960 by Oskarshamn shipyard, Oskarshamn, Sweden as the car/passenger ferry SS Bore for Steamship Company Bore, Finland. She was later known as SS Borea, before being rebuilt in her current form in 1988.

In her current construction the Kristina Regina does not fulfill the requirements of the SOLAS 2010 regulations, and as a result she is likely to be withdrawn from international cruise service by 2010.
Links: en.wikipedia.org
361 views