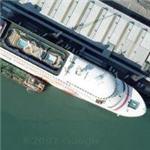 By kjfitz @ 2009-11-26 10:00:42
@ 50.904951, -1.430301
Southampton, United Kingdom (GB)
The MS Ocean Village 2 is the latest offering from cruise operator Ocean Village. Ocean Village needed a new vessel to expand its operation into the summer Mediterranean and winter Caribbean markets. The ship was launched from Southampton, UK, after an extensive refit in May 2007

The MS Ocean Village 2 was constructed in 1990 by Fincantieri Maritimo of Italy for Sitmar Cruises and has sailed under three brands. The ship originally sailed as the Crown Princess for Princess Cruises (later taken over by Sitmar Cruises), then as the Arosa Blu for A’Rosa in 2002 before a 2004 refit for Aida Cruises as the AidaBlu.
Links: www.ship-technology.com
834 views

Not any more it isn't. The vessel is currently in Singapore being refitted as P&O (Australia) "Pacific Jewel" and is due to commence sailing out of Sydney in December 2009.