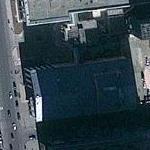 The beginnings of a contemporary professional theatre in Mongolia were laid down with the establishment of a National Central Theatre in 1931, which was an extension of the Folk Stadium which was inaugurated in 1927.
Links: en.wikipedia.org
824 views