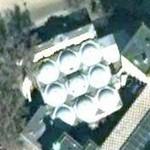 By Dania @ 2010-09-26 16:22:58
@ 42.696335, 23.324575
Sofia, Bulgaria (BG)
The National Archaeological Museum (Bulgarian: Национален археологически музей, Natsionalen arheologicheski muzey) is an archaeological museum in the centre of Sofia, the capital of Bulgaria. It occupies the building of the largest and oldest former Ottoman mosque in the city, Büyük camii ("Grand Mosque"), built from stone around 1474 under Mehmed II. The museum was established as a separate entity in 1893 as the National Museum directed by the Czech Václav Dobruský with its headquarters in the former mosque that previously housed the National Library between 1880 and 1893.

The museum was officially opened and inaugurated in 1905, as by then all archaeological exhibits previously kept all over the city were moved there, in the presence of Knyaz Ferdinand of Bulgaria and Minister of Enlightenment Ivan Shishmanov.
Links: en.wikipedia.org
407 views