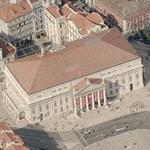 By adrbr @ 2008-03-04 19:52:33
@ 38.714824, -9.139497
Lisbon, Portugal (PT)
The National Theatre of Dona Maria II (or Teatro Nacional de Almeida Garrett) on the north side of the Rossio was built by the Italian Fortunato Lodi on the initiative of the author and temporary liberal politician Almeida Garrett, and is named after Queen Maria II, daughter of Pedro IV. The Palácio dos Estaus, a palace used by the Inquisitors to carry out their work, originally stood on this site. The foundation stone of the present Classical building was laid in 1842 and it was officially opened four years later. The interior was destroyed by fire in 1964 and not reopened until 1978, as this was seen as an opportunity to renovate completely the theater and equip it with modern technology.
693 views