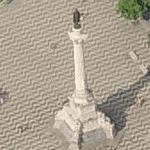 By adrbr @ 2008-03-04 19:44:31
@ 38.71369383, -9.13922222
Lisbon, Portugal (PT)
In 1870 the 23m/75ft tall marble pillar topped with a bronze statue of Pedro IV was set up in the middle of this extensive Praça de Dom Pedro IV. After 1807, when the royal family fled from Napoleonic troops, the son of King Joao VI stayed in Brazil. He remained there after his father returned to Lisbon and became in 1822 Pedro I, emperor of Brazil, which was henceforth an independent country. An international competition, in which 87 artists took part, was held to undertake the statue. The work was finally awarded to a sculptor and an architect from France. The four figures on the plinth symbolize Justice, Wisdom, Courage and Restraint - attributes ascribed to Pedro IV.
534 views