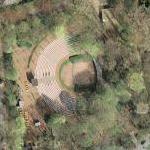 By LancelotLink @ 2010-07-10 04:55:41
@ 51.485783, 7.141097
Wattenscheid, Germany (DE)
In 1933 the Nazi Propaganda Ministry under Joseph Goebbels began a movement based on the "Blut und Boden" (Blood and Soil) ideology - the so-called "Thing" movement. A Thing was an ancient Nordic/Germanic gathering of the people, in an outdoor setting. The Nazi Thing gatherings were to be held in specially-constructed outdoor amphitheaters, called (in the singular) Thingplatz or Thingstätte. Here, the people would gather for Völkisch meetings and to view theater and propaganda presentations written especially for the Thing style. The Thing sites were to be built as much as possible in a natural setting, incorporating rocks, trees, water bodies, ruins, and hills of some historical or mythical significance.
Links: www.thirdreichruins.com
680 views