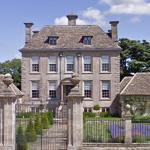 By LancelotLink @ 2010-09-17 10:24:44
@ 51.732816, -2.184761
Stroud, United Kingdom (GB)
Nether Lypiatt Manor is a compact, neo-Classical manor house situated in the parish of Bisley, near Stroud in Gloucestershire. It was formerly the country home of Prince and Princess Michael of Kent. It is possible that the architecture of Nether Lypiatt Manor was inspiration for the building of the Governor’s Palace, Williamsburg, Virginia, United States of America, built only a few years later.
Links: en.wikipedia.org
1,583 views