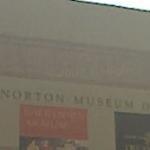 By kkeps @ 2009-01-30 17:21:25
@ 26.700364, -80.053952
West Palm Beach, Florida (FL), US
The Norton Museum of Art is a major cultural attraction in Florida. The Museum is internationally known for its distinguished permanent collection featuring 19th and 20th century European and American art, Chinese, contemporary art and photography. From its founding the Norton has been famous for its masterpieces of 19th century and 20th century painting and sculpture by European artists such as Brancusi, Gauguin, Matisse, Miró, Monet, Picasso and by Americans such as Davis, Hassam, and Hopper.
Links: www.norton.org
540 views