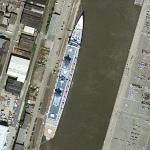 Norway was originally the French atlantic liner France and started service in 1961. In 1979 she was sold to Norwegian Cruise Line and served as cruise ship until May 25, 2003 when she was damaged by boiler explosion and towed to Bremerhaven.
Links: en.wikipedia.org
1,268 views