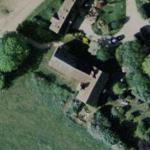 Odda's Chapel was built in 1056 by Odda, a relative of King Edward the Confessor, in honor of his brother Aelfric. It lay neglected until the 20th century, when the plaster that had long covered the Saxon masonry was removed.
Links: en.wikipedia.org
367 views