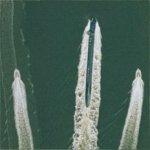 The 14 Trident II SSBNs together carry around fifty percent of the total U.S. strategic warhead inventory. The exact number varies in an unpredictable and highly classified manner, at or below a maximum set by various strategic arms limitation treaties. Although the missiles have no pre-set targets when the submarine goes on patrol, the platform, when required, is capable of rapid targeting using secure and constant at-sea communications links. The Ohio class is the largest type of submarine ever constructed for the U.S. Navy, and are second only to the Russian Typhoon-class in mass and size.

The Ohio-class submarines were specifically designed for extended deterrence patrols. Each submarine is complemented by two crews, Blue and Gold, with each crew operating on a 100-day interval. To decrease the time in port for crew turnover and replenishment, three large logistics hatches are fitted to provide large diameter resupply and repair openings. These hatches allow sailors to rapidly transfer supply pallets, equipment replacement modules and machinery components, significantly reducing the time required for replenishment and maintenance. The class design allows the vessel to operate for 15+ years between overhauls. The ships are purported to be as stealthy at 20 knots (their cruising speed) as previous subs were at a dead crawl of 6 knots, although exact information remains classified.
Links: en.wikipedia.org
1,952 views