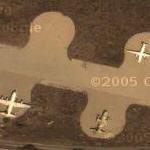 By kjfitz @ 2005-06-30 21:48:53
@ 32.899332, 13.282428
Tripoli, Libya (LY)
Originaly the American Wheelus AFB it was renamed Okba Ben Nafi Air Base [aka Uqba bin Nafi Airfield], and went into Soviet use, an irony of the Cold War. It became a Libyan air force installation and contained the service's headquarters and a large share of its major training facilities. Both MiG fighters and Tu-22 bombers were located there. On 15 April 1986, it was bombed by the U.S. as one of the targets of Operation Eldorado Canyon (Is that debris from the attack along the south western edge of the base?)

This base was recently re-activated as a domestic airport and re-named Methega.
Links: www.globalsecurity.org
2,425 views