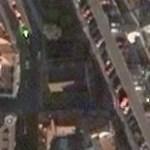 Completed in 1270 in gothic style, it was one of Prague's first gothic buildings. It was originally called the New or Great Shul. When newer synagogues were built in the 16th century, it became known as the Old-New Synagogue. A still older synagogue, known as the Old Shul, was demolished in 1867 and replaced by the Spanish synagogue.
Links: en.wikipedia.org
1,383 views